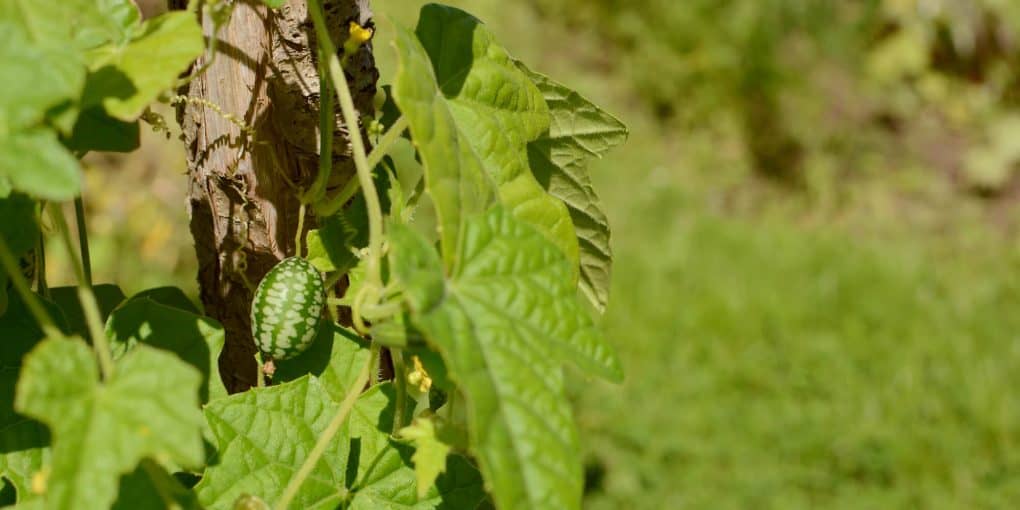 What Cucamelons Are and Why You Should Grow Them

As a vegan, I’m always hunting for some new veggie to add a little pa-zing to my dishes. And lately, I’ve noticed pictures floating around the web of what look like dainty, grape-sized watermelons nestled in a gardener’s hand. I was excited, but my brain raced to those trendy, cross-bred oddities that take the markets by storm from time to time, like cotton candy grapes or grape-flavored apples. Surely, tiny and cute as those mini-melons were, they must have been another one of those flashes in the pan. They couldn’t possibly be an actual fruit, right?

Wrong. Turns out, they’re something known as cucamelons, and are the most darling savory fruit around. Resembling a watermelon for your fairy garden, these morsels are a sight. But if you bite into them expecting lush red insides, prepare to be surprised. Cucamelons taste nothing like a watermelon and are akin to cucumbers with a sour twist – hence the “cuca” part of their name.

Often enjoyed as a poppable delight straight off the vine like grapes, cucamelons offer more than just a simple snack. They look delectable halved and incorporated into this gorgeous sunomono salad, and are drool-worthy as an integral player in this crisp bruschetta. Personally, I’m over here fantasizing about thinly slicing them as part of a (tofu) BLT for a light summer dinner, ideally with this cucamelon mojito in my free hand cooling me down. Sign me up for the next cucamelon party, y’all.

And it’s not just that cooling, sour flavor that has me amped to try these out in my own garden.

Also referred to as mouse melons (these things seriously just get cuter and cuter), the cucamelon is native to Mexico and Central America, and has been a staple of the indigenous diet since pre-Columbian times. Fiber-rich and as hydrating as their larger, cucumber cousins, cucamelons are an excellent way to promote healthy digestion. The only problem is finding where to buy the darn things! That’s where your gardening skills come in handy.

Okay, okay, you think. They look cute, I’ll give you that. But cute has got to translate to finicky, right?

Think again. Hardier than both of their namesakes, these crawling vines can withstand drought and temperature drops better than cucumbers and watermelons, and are a great fruit to grow in many zones during the summer.

Growing best during warm seasons, they make an ideal (late) addition to any southern garden. But don’t be deterred if you’re further north. One gardener left a comment at this article at Mother Earth News, reporting that they have successfully grown potted cucamelons for several years living in the Pacific Northwest with a strong yield.

Since their growing time is a mere 80 days from sowing to harvesting, there may be time yet for all of us would-be cucamelon lovers, although it is worth noting that widely available information on growing them is woefully minimal in English, and I have yet to strike on a website giving information for planting times according to the USDA hardiness zones. But so long as they’re planted within three months prior to the first frost, your cucamelon crop may still provide you with a bounty of these crisp dreams.

To get cucamelons thriving in your own yard, the first thing you need to do is find seeds. A less-than-common fruit for the average North American gardener, mouse melon seeds typically have to be ordered off the internet. A quick search on Amazon produces several seed packets for sale ranging anywhere from $2 to $8; the more expensive ones, naturally, are the organic certified ones.

After choosing the seed packet that works best for you, it’s time to get planting. Although tips on planting are scarce for English-language gardeners, the internet did provide a handful of anecdotal wisdoms from gardeners who have grown solid cucamelon crops.

One wonderful thing about growing these fruits is that, apparently, they thrive in a multitude of potting scenarios. Growing well in pots and old rice sacks, or directly sown into good garden soil, cucamelons can be a plant for either your sunny balcony garden or in your yard plot. Potted or not, these plants require a trellis for climbing, or else they’ll be wrapping around whatever else they can find, and take up more space than you bargained for. Plant the seeds anywhere from six to twelve inches apart, as they can grow to be over five feet tall, and keep them well watered and in good sun.

The tricky part comes when it’s harvesting time. As pointed out by Mary Ellen Ellis of Gardening Know How, knowing when to pick a fruit you have never bought from a store – or even seen in person – can be less than intuitive. Especially when they’re so much smaller than cucumbers and watermelons. She recommended harvesting the fruits when they’re no longer than an inch and still firm to the touch. Any larger, she warns, and the fruit can rapidly decline into seedy territory.

However, for those cucamelons that overripen past the point of being enjoyable, you can always harvest their seeds – a smart decision as the seeds are so hard to come by. To do this, cut open an overripe cucamelon and remove the seeds. Soak them for five days in a jar of water, then spread the seeds out to dry. When the seeds have dried out entirely (The Gardening Channel says they should be “crisp enough to snap”) you can store them in a jar for up to ten years. Talk about some forward planning!

When you reach the end of your harvest and find yourself in love with these dear mouse melons, eager for the next season, you’re in luck. Several websites recommend digging out the tuber-like roots and storing them somewhere cool and dry over the winter. Once the final frost has vanished in the spring, plant the tubers again for an earlier, more prolific yield.

While the Colorado planting season wraps up soon, I won’t be forgetting about these adorable, crunchy cucamelons any time soon, and I look forward to adding them to my garden in the spring.

Tell us about your cucamelon plans in the comments below!

What is Goutweed and How Do I Get Rid of It

What you need to know about growing hibiscus

Out of Space to Plant? 5 Easy Options to Make More Room

Amazing Invention Will Inspire You to Make Your Own Hot Tub